Unless you’re completely burned out by a lengthy competitive career you’ll eventually find yourself in a beer league — the epicenter of adult hockey culture. And there’s no shame in that! Remember when you wished you could choose your teammates, locker room policies, and team name? Those are just a few perks of playing in a beer league.  Although we never have any fans to witness these first hand, here are 5 things you’ll only ever see at a mens league hockey game:

Yeah, we get it… if our paychecks were dependent upon our on-ice performance we’d need to seriously reconsider our effort level. But while we find ourselves in this empty arena with some of our best friends, many of which play defense and goaltender, we’re going to continue to not give a shit about backchecking. Strategically saving our legs and back, it also provides a great opportunity to chirp our D-men and tendy for blowing that odd-man break. At least you have a plan, “boys, next shift hit me with a stretch pass at the far blue. I’ll bury.”

Of course poor officiating exists in every level of just about every game known to man, but nothing compares to beer league referees. Frankly, it’s hard to hate on them. It’s 11:30pm, two teams of grown men with embarrassing talent levels are slapping the puck around like it’s on fire. And of course there’s a few guys trying to earn a tryout from an imaginary GM not in attendance. At this point, no one really cares about the missed offsides or slashing penalty… except of course the guys pretending to compete for the cup. But hey, we’re not accommodating those Try Hards anyways. Just drop the puck and get out of the way ref.

Beers and Chew in the Locker Room & on the Bench

With no coaches to reprimand these grown-ass-men, they’re going to do what they like to do. And far-too-often in hockey circles that includes enjoying a cold beer and for some a nice lipper. Hey there’s no wives, kids, coaches, or fans to disappoint or offend. Live it up buddy.

Every beer league, often every team, has a Hot Head. Any slight contact or errant stick will work this guy into a frenzy of trying to bait the opposition to fighting. Most of the time he’s embarrassing but when the other team’s “heavy” obliges his offer to throw down it becomes wildly entertaining. While we wish it was acceptable to arrange fights amongst our middle-aged corporate coworkers, for now we have to settle for our teammate Dan, a vastly overweight IT consultant, to drop the mitts with Lou, a balding tax attorney, to fill the void. Beat the hell out of each other guys, it’ll make for great office gossip tomorrow.

Every young, perverted hockey player at one point or another wished they could name their team. You assume most adults playing in a beer league would select a conservative, inoffensive name. Then you remember it’s a team of hockey players. Just a few we’ve seen around the rink:

Drunk Again & Look’n to Score? Sounds like a good time. Multiple Scoregasms? Count us in. Premature shooters? Sounds like a personal problem but funny nonetheless. The Dekes of Hazard? Clever, please point us in Daisy’s direction. 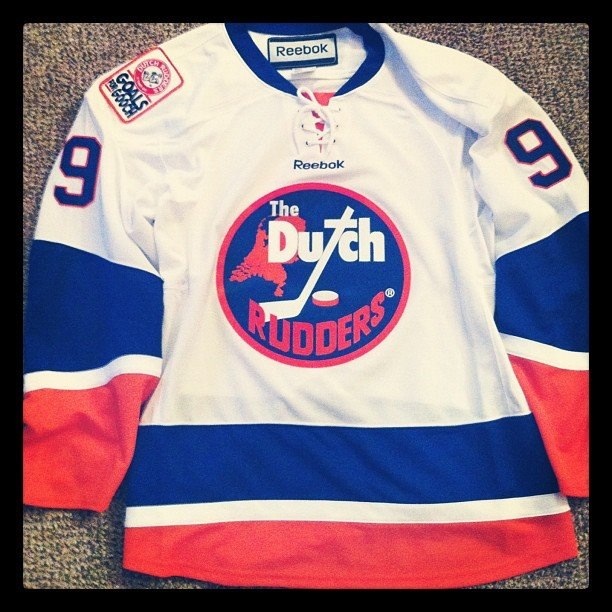