Adult league, beer league, men’s league, whatever you call it, is one of the great joys of playing hockey. It’s the inevitable purgatory of every player who has ever played this great game. Whether you were able to display your talent [or lack thereof] professionally, collegiately, or just recreationally, we all end up in adult league.

Frankly, it’s a blessing. What adult do you know that still organizes pick up football games with their old teammates? Other sports simply aren’t adaptable enough to allow players of all ages to continue to enjoy the essence of the game without a high risk of injury.

But for most of us, regardless of where we played prior, beer league is a completely different beast that comes with its own set of etiquette and expectations. Whether you had a “cup of coffee” in the show or you just picked up your first set of pads last week, familiarize yourself with the dos and don’ts of adult league:

Bring Water Bottles
We’re not squirts anymore. Far gone are the days we can skate an entire practice without requiring a water break. Nowadays we’re huffing and puffing after one down-and-back. Water bottles are now essential.

Pay Your Team Dues On Time
If you’re lucky, your team GM doubles as the team’s Check Book, covering the team dues in time to ensure a spot in your league. No one wants to front an entire team fee let alone have to repeatedly ask for it back throughout the course of the season. Be a stand-up teammate and pay your share of the team dues ASAP.

Enjoy the Locker Room
You’re already out of the house, playing a game, and in a locker room surrounded by your hockey brethren. Unless you NEED to rush out of the rink, take your time, tell stories, jokes, and just BS. Opportunities like these are few and far between once competitive hockey is behind us. Take advantage of the locker room time when you have it.

Bring 2 Jerseys
It’s bound to happen at least once. Your whole team is dressed and walking out of the locker room for warm-ups when you see the opposing team rocking the same color jersey, already on the ice. Good thing you brought a light and dark jersey in your bag, you’re prepared to suit up against anybody.

Stretch
We know 99% of you will completely ignore or skip this section entirely — your loss. Come to grips with the fact you’re not as fit, flexible, and athletic as you used to be. Unless you like testing the limits of your fast-aging body, do yourself a favor and get a quick pre-game stretch in. Your body will thank you later.

Have an Awesome Team Name 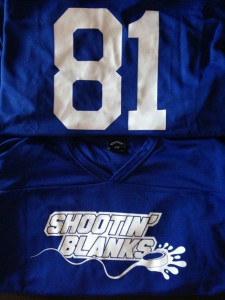 We’d have killed to have the chance to name our teams growing up… but now we’re older, wiser, possibly more perverse and play at a time where we’ll unlikely offend too many people. Plus, let’s be honest, as hockey players we tend to have a sick sense of humor. Put it to good use and give your opponent a good chuckle when they see who they’re playing tonight.

Bring Beer
Few things are as disheartening when you realize you and all your teammates neglected to bring beer for the post-game locker room. Of course, we’ll still enjoy telling stories but how are we going to refuel all the carbohydrates and calories we just burned without cold beer?! Especially if it’s your first skate with a new team, bring the beer, your teammates will take note.

Backcheck Like Its Game 7 of the Cup Finals
What are you trying to prove out there? Unless it’s a playoff game, don’t go ruining a perfectly good 2-on-1 by being Johnny try hard. Not only do we not want you to pass out from your effort level, but you’re making the rest of us look old and lazy. Cut the shit!

Over Celebrate
Congratulations, you scored or your team won. What an achievement. Celebrate in an orderly fashion, remembering it’s midnight, no fans are in the stands, and no reporters are here to capture a post-game interview. Of course, enjoy the moment but don’t rub it in your opponent’s face. Act like you’re an adult and you’ve been there before.

Drink Too Much Before the Game
Ice hockey requires too much balance to be able to enjoy a buzz while on your skates. Trust us, you won’t enjoy it nearly as much as you think. You’ll either feel like you’re going to fall any second or throw up the first time you skate hard. Regardless, the buzz is best saved for after the game.

Mooch Tape
Yes, we’re adults with paying jobs who really don’t mind if you use some of our tape, but we’re also men and women of principle. We understand pro shops are rarely open by the time we head to or arrive at the rink, but that doesn’t remove our responsibility of sourcing our own tape… if so, we’d all be screwed! Either make time for a trip to your pro shop or sign up for the Hockey Players Club and have your tape and essentials delivered.

Pick a Fight
Seriously, don’t be the Hot Head trying to prove something out there. We’re all just trying to get a sweat in and have fun with our buddies. Not to mention, we have work tomorrow and aren’t in the mood of explaining our black eye to our boss. None of us are paid to play and we’re not battling for the Stanley Cup so save your aggression for another time.

Use a Roller Bag 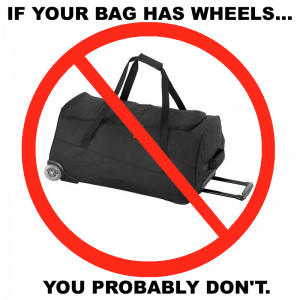 Unless you have an injury requiring you don’t throw any weight over your shoulder or on you back, DO NOT use a roller bag. You’re not a little kid incapable of carrying a traditional hockey bag, plus who wants to deal with getting those odd-shaped things in and out of our cars? Please don’t embarrass your teammates and use a normal bag.

Forget the Beer
No further explanation is necessary.