As we all know, goalies have a reputation for being weird. Sure this might not be true for all, but the stereotype exists for a reason. One of the things goalies stress about most is their pads. A tendy’s gear setup is something they take great pride in. However, unlike pro goalies, beer league netminders tend to focus on style and uniqueness rather than functionality. This leads to some pretty funny, one-of-a-kind setups. So, without further ado, lets take a look at some of the best pillows to grace local community rinks.

These beauties really capture the true essence of what beer league hockey is all about. But then again, who in their right mind drinks Heineken? A goalie, that’s who.

Whoever owns these pads is living the beach lifestyle.  He strolls in the locker room rockin’ some Chubbies, a fresh pair of mandles and one hell of an impressive sun burn.  He probably drinks a piña colada or a strawberry daiquiri after the game…and there’s nothing wrong with that.  Like most other goalies – he’s a strange bird. 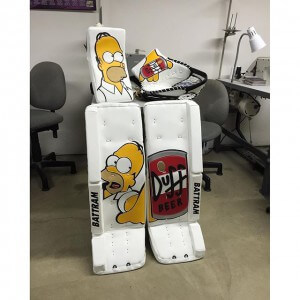 The homers feature Homer Simpson – arguably the biggest beer lover of all time. These are great for a tendy that lets a lot of pucks past him because he can just recite the classic Homer “DOH!” 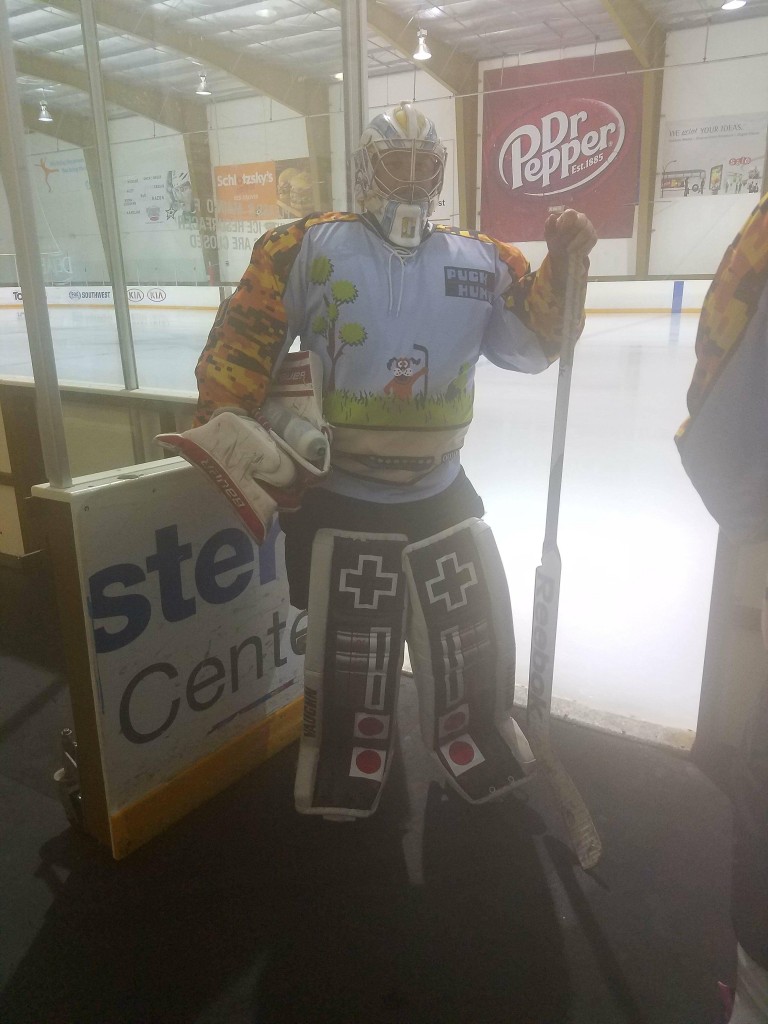 This setup goes even further than just the pads. With the jersey pulling the whole thing together it may be safe to say that hockey is not this netminder’s first love. That and he’s still a virgin (I kid, I kid!).

**Correction: Special thanks to Dan on Facebook for correcting us.

Asshat has been sent to the penalty box to feel shame 🙂 The guy that rocks these pads is probably the same guy who’s trying to get the boys to go to the ripper after an 11 PM game on a Monday night. This guy keeps it 100 and makes money saves all night long.  After all, in the words of Puff Daddy, “it’s all about the Benjamins baby!” These are the only goalie pads you will ever find to never have a puck mark on them…and not just because they are mainly black. Clearly that deathly stare and the power of the force ensures no pucks make it to the back of the net. This tendy relies on luck, but it would appear his luck is good since he has two different blackjack hands on his pads. I would keep him in the cage for now, but be careful, just like in blackjack his luck is going to run out. 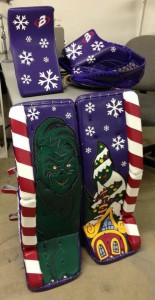 Although somewhat shocking and over the top these have to be the most festive pads anyone has ever seen. The real question is whether the lucky owner of these pillows wears them year round or only between Thanksgiving and New Years? You see these pads most often in the lower leagues at a local rink where the goalie is getting up there in age, but refuses to get new gear. These are the leg pads he used in high school back in 1965. The protection is awful and you are afraid that every shot may break the poor guy’s leg. The only other time you see these prehistoric beauties is when a team’s goalie no-shows and they’re forced to throw some sorry sap in net. Either way these are nobody’s first choice.

We saved the best setup for last. This is, without a doubt, the greatest effort ever taken by a goalie to blend in with the net. Sure some guys will wear white pads, but this takes it to a whole new level. Cheers to this guy for his effort. If he’s dog shit wearing these legendary pillows, nothing will help him.

Have any of you ever seen a crazy unique setup that we missed? Comment below with the best beer league goalie pads you have ever seen.