Then again, keeping the birthday weekend going strong through Saturday night, Schwartz admits to falling asleep while baking a whole box of chicken fingers. Rather than be discouraged by burnt, shriveled chicken fingers when he woke up two hours later, he spitefully ate them all. All four servings. Holy sh!t.

But before Kittelberger could get the boys to talk hockey, Kustron, a college lacrosse coach, shares with the crew his horrendous Saturday. Not only did his team get their asses kicked, their broken-down bus added 3 hours on their return trip. He referred to it as getting his balls kicked repeatedly, to which Rubeo reminded him and the rest of the podcast crew, “some people pay good money for that.”

“Jumbo” Joe Thornton tied Teemu Selanne for 15th in all-time points and passed Gordie How for 9th in all-time assists last Monday. What a legend?!

Penguins forward, Phil Kessel recorded his 800th point assisting on Sidney Crosby’s goal against the Calgary Flames. Phil “the thrill” is the 16th American to hit the milestone.

With two back-to-back 4-point performances last week, Tampa forward Nikita Kucherov is on pace for 130 points this season, a point total that hasn’t been reached since 1996. And here is the list of the last 3 players to hit 130: Jagr, Lemieux, Gretzky. Not bad company.

Seriously, can you make a big clean hit in the NHL anymore without a fight?

Do you agree with the announcers? SOUND ON.

The Flyers acquired G Cam Talbot from Edmonton in exchange for Anthony Stolarz. Just padding their stats for most goalies to start for an NHL franchise in one season?

Edmonton was done shaking up their roster yet, reacquiring forward Sam Gagner from the Vancouver Canucks for forward Ryan Spooner.

Devils netminder, Cory Schneider got his first win in over a year.

Did you see these cheap shots in the WSHL?

Or how Stamkos almost broke Cogliano’s ankles with a little shake-and-bake before snipping a power play goal?

And did you know Happy Gilmore turned 23?! What’s your favorite quote?

Kittleberger poses a great question to the crew, what’s the best story behind a teammate’s nickname you know?

And the boys discuss their trade deadline predictions for Panarin, Bobrovsky, Duchene, Stone, and Simmonds. 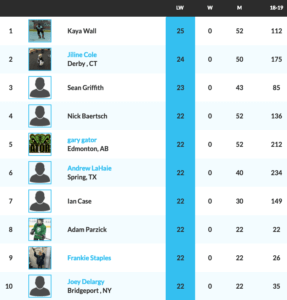 Gary Gator, Kaya Wall, and Nick Baertsch are leading the HPC pack for February with 52 points. With 11 days left in February, it should be a dog fight to win the free HPC XV3 hockey stick.

As always, the podcast crew discussed 3 of their 9 picks for this week’s Weekly Picks:

Make sure to submit your Weekly Picks for a chance to win a FREE $20 HPC gift card (for weekly winners) and Hockey Players Club XV3 hockey stick (awarded to monthly winners).

And no Hockey Players Club Podcast would be complete without a round of Top Shelf Trivia. With Phil Kessel’s 800th point accomplishment in mind, Kitts brought out a list of top 10 US-born scorers.