With the NHL trade deadline passing, the Hockey Players Club podcast crew had a lot to get to but not before chirping Kustron for his unbelievably poor performance in last week’s Weekly Picks, scoring a total of 2 points out of a possible 30. Schwartz let the boys know that of everyone that registered a point last week, Kus was dead last. The fact only worsened by Kustron swearing he tries every week. Hard to believe, isn’t it?!

But Rubeo professes he and Kittelberger don’t have much more to brag about after their beer league championship game the night before. After a strong team W against longtime rival Spearmint Rhino the week prior in the semi-finals, Rubeo managed to blow multiple scoring chances, including a shorthanded breakaway in the second period of the championship game that would have tied it up at 2. Instead, they entered the third period down 3-1, quickly went down 4-1 shortly thereafter before clawing back with 2 goals in the last minute to ultimately lose 4-3. Should’ve scored that breakaway, Rubeo!

This year’s trade deadline did not disappoint with a number of moves made [find the NHL’s complete trade tracker here]. But who were the winners and losers?

Columbus added the most talent to their roster, including Ottawa’s Matt Duchene and Ryan Dzingel, before acquiring Adam McQuaid from the Rangers and Keith Kinkaid from the Devils at the deadline… and considering they held onto pending UFAs Artemi Panarin and Sergei Bobrovsky, it’s clear their upper management has decided they’re all in!

Vegas landed Mark Stone from Ottawa and apparently already agreed upon a massive contract extension. We understand the salary cap is continually going up but does he deserve Ovi money?

Dallas added depth acquiring Zuccarello from the Rangers and Lovejoy from the Devils. Unfortunately, Zuccarello is expected to miss 4 weeks at least after sustaining a broken arm blocking a shot in his Stars debut; he scored and recorded an assist earlier in the game.

Winnipeg landed Hayes from the Rangers but did they give up too much?

All awhile, the Rangers and Senators stockpiled their prospect pool and draft picks.

In other hockey news…

Joe Thornton recorded a hat trick against the organization that drafted him 22 years ago. His most recent hat trick prior: 8 years and 113 days.

Alex Ovechkin tied Marcel Dionne and Mario Lemieux for the second most 40 goal seasons in the NHL with 10. Considering Gretzky holds the record at 12, some of the pod crew think he’s bound to break the Great One’s mark.

Patrick Laine started the season on fire but only scored 2 goals in 28 days from December 16th to February 20th. He has since scored 3 goals in his past 2 games but how much will his inconsistency cost him in his next contract? Does he maybe get a shorter bridge deal?

Will anything slowdown Nikita Kucherov? The first player since Mario Lemieux to score 97 points in 60 games and first to reach 100 points this season. Then he goes ahead and scores shootout goals like this, making it look easy:

Tampa Bay tied the NHL record for most wins in 60 games with 45. But will they overcome past years playoff woes?

HPC podcast fan, Justin Greene, wanted to know the crew’s favorite players. Considering they’re all 33-34 years old and from Pittsburgh, it’s no surprise their all-time favorite is Lemieux but listen to the episode for who they like in today’s NHL.

Check out our weekly #hockeytough posts showcasing the badass toughness of being a hockey player. Hit us up on Instagram or email to submit your pics or videos.

@michael_woll93 is #hockeytough. 💪 Kid went face first into the boards so hard it dented his cage.🤪 15 zips in his forehead, 4 in his lip, a mean shiner and he’ll be back on the ice in two weeks. 🙌 Get well, buddy! ⚠️Swipe 👈 to see more…WARNING…graphic! ⚠️ ⁣ DM us your #hockeytough pics to be featured!

Barzal and Beauvillier share a unique warm-up routine (see below) and the crew shares their’s from back in the day.

The boys agree, Connor McDavid deserved a 2-game suspension for this headshot:

Should McDavid be suspended for this hit on Nick Leddy? 😬⁣ ⁣ UPDATE: McDavid received a 2 game suspension.

And did you hear Jeremy from HowToHockey’s 4-year-old son mic’d up playing hockey? It’s adorable.

With 2 days left in February and 10 points on the line, it will be a battle till the end to win the free HPC XV3 hockey stick for scoring the most points in February: 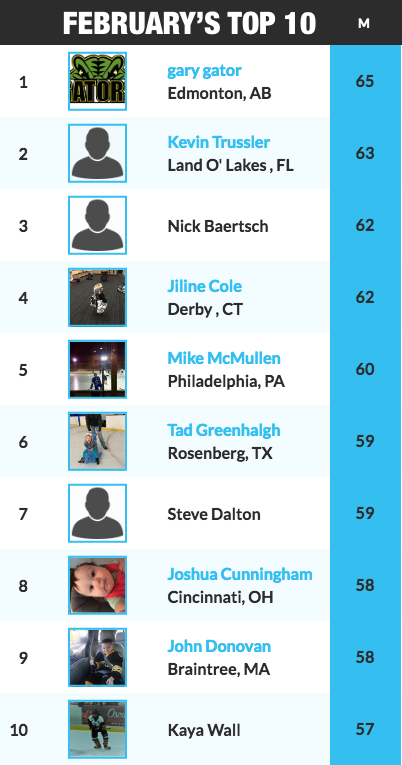 As always, the podcast crew discussed 3 of their 9 picks for this week’s Weekly Picks:

Make sure to submit your Weekly Picks for a chance to win a FREE $20 HPC gift card (for weekly winners) and Hockey Players Club XV3 hockey stick (awarded to monthly winners).

Of course, no Hockey Players Club Podcast would be complete without a round of Top Shelf Trivia. Rubeo had the boys guessing the top 10 in all-time NHL earnings to date. It was a tough one.