The boys record this week’s podcast directly after the Penguins v. Capitals game Tuesday night, attended by podcast co-host Kyle Kittelberger. Not only was Kitts treated to a come-from-behind victory for the Pens, but he also witnessed Evgeni Malkin record his 1,000th NHL point and Alex Ovechkin record NHL point 1,200. Not a bad game to attend!

Hockey Players Club co-founders and podcast co-host Matt Schwartz and Brandon Rubeo attended the Let’s Play Hockey Expo in St. Paul, Minnesota over the weekend. Not only did they rave about the hockey scene, apparently their lead up to St. Patrick’s Day is one hell of a bash. Plus, have you ever heard of “Minnesota nice?” We guess it’s to offset the miserableness of their winter weather.

NHL legend, Ted Lindsay passed away at age 93. He won an Art Ross Trophy and 4 Stanley Cups on the Red Wings’ “production line” alongside Gordie Howe and Sid Abel. Known as a fierce competitor he earned the nickname “Terrible Ted” and many contribute his style of play to be the reason the NHL defined elbowing and kneeing penalties. Plus, all NHL players since have benefitted from Lindsay’s foresight, sacrifice, and perseverance, as he was a key driver to forming the NHLPA. RIP 🙏🏻

Meanwhile, Matt Cullen played his 1,500th NHL game. He is only the 20th NHL player to reach the milestone, and second American born player ever behind Chris Chelios.

The Vegas Golden Knights are 6-1 in the “Stone Age,” aka since acquiring Mark Stone from the Senators at the trade deadline. Is he the missing piece to bringing the cup back to Sin City?

Jon Cooper had some high praise for Mitch Marner after Tampa beat Toronto 6-2 Monday night: “He is as smart a player as this league has not only seen this year but has ever seen. And somebody that can elude defenders and do the things he can does with the puck on the offensive side of it, it translates to the defensive side as well.”

Brad Marchand replied to the reporting of Cooper’s quote on twitter, “Told ya” after trolling the Leafs twitter account a week earlier suggesting Marner is worth at least $12M per season. Is he really a fan? Or is he just trying to push NHL salaries up??

With no other trophies or accomplishments left to win, Penguins captain Sidney Crosby’s name is being thrown around as a Selke candidate. If he were to win it, he’d be the first to have a Selke and Art Ross.

The NHL General Managers held their annual meeting in Boca Raton, Florida last week to discuss the state of the game and how they might improve it. Overall, the sentiment was the game is the best it’s been without much need of change, as in year’s past, but a number of ideas were discussed, like higher fines, requiring helmets in warmups, no line changes if your goalie stops play, and the ability for the refs to use video review mid-game to assess a major penalty.

What changes would you make to improve NHL action? Rubeo suggested continuing to contour goalie equipment. Schwartz likes the idea of no changes if your team causes a stoppage and/or no icing allowed when shorthanded. But Kittelberger had the craziest idea of allowing mid-game substitutions like baseball. Yes, you read that right.

And did you see these crazy hockey videos across social media?!

A vicious uppercut in a Swedish league launched a player’s helmet at least 10 feet in the air:

And how about these highlights from the Minnesota state tournament?!

Coming in hot to the pregame intro…

And the goal and celly dreams are made of…

Every high school hockey player’s dream. What a finish. #TheTourney19

Last but not least, did you see this beer leaguer shotgun a Tim Horton’s coffee in the drive thru?! That’s one pregame routine…

When you’re late for #beerleague and need a quick pick-me-up 😂⁣ ⁣ 🎥: @spencer.jenkin

But after first and second place finishes in the first two weeks of March, Kittelberger, lovingly known as Shittelbger by the rest of the podcast crew, leads Weekly Picks for March. If the trend continues, he’ll win a free HPC XV3 hockey stick.

Onto less nauseating conversation, the boys picked 3 of their 9 picks for this week’s Weekly Picks. Here are screenshots of Rubeo’s 3 selections: 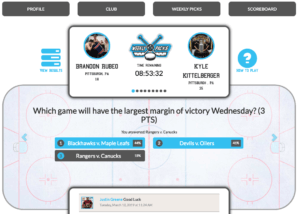 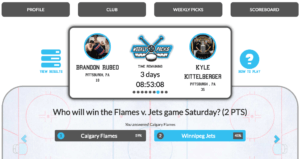 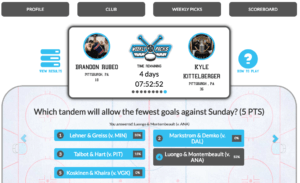 As always, the boys wrap up up the show with a round of Top Shelf Trivia. This week, Kittelberger brings a list of the top goal scoring seasons of each NHL franchise. How many can you guess?