The boys are finally fully recovered from celebrating St. Patrick’s Day. HPC podcast co-host Kyle Kittelberger shares a story about one of his newbie beer league teammates, “Munson” and his trials and tribulations of learning the defensive side of hockey… of any side of hockey for that matter. But Kus, Rubes, and Schwartz agree, it’s awesome his beer league team welcomes a new guy looking to learn and enjoy the game. After all, hockey is for everyone.

A number of NHL players hit milestones this past week:

Bruins’ assistant captain Patrice Bergeron recorded his 800th NHL point. Talk about a season to remember after playing in his 1,000th NHL game a month ago.

Not to be outdone by guys who put pucks in the net, netminder Carey Price surpassed NHL legend Jacques Plante for most wins as a Canadiens goaltender with 315. Big ups to Carey!

And onto a lesser known milestone, but one appreciated by the HPC podcast crew: it’s officially been 16,000 days since the Philadelphia Flyers last won the Stanley Cup.

IT HAS BEEN 16,000 DAYS SINCE THE PHILADELPHIA FLYERS LAST WON A STANLEY CUP

Kittelberger wants to know, what’s going on with the Maple Leafs and their goaltending of late? They’ve allowed 6 goals against in 3 of their last 4 games (5 against in the other game), most recently losing 6-2 against the Senators. Not exactly the trend you like to see heading into the final 10 games of the NHL regular season.

And with the final stretch of the NHL regular season upon us, the HPC podcast crew debates who they see making and missing the playoffs this year. Given the current NHL standings, most agree not much is likely to change in the East but some shakeup could go down out West. The biggest question for the boys: will the Arizona Coyotes maintain their momentum (7-2-1 in their last 10) and make the playoffs this year? Or will the Wild ruin their Cinderella story?

We know the Blue Jackets are fighting to clinch a playoff spot but did you see their superstar Artemi Panarin drop the mitts with Charlie McAvoy? Don’t hurt those silky mitts, Breadman!

And Kittelberger desperately wants to know: if a player’s stick breaks in the middle of a shift, what should he do? Kittel has a strong opinion and apparently some pent up aggression towards players who continue to play without a twig in hand. Painful to admit, he makes some good points.

We’re terribly sorry if somehow we’ve contributed to the growing movement of shotgunning a beer from your hockey skate – then again we keep talking about and sharing videos – but a cocktail of beer and skate bacteria sounds anything but satisfying.

In less disgusting yet embarrassing news, Tyler Seguin not only missed an empty net on a breakaway, but he also shot the puck out of play:

Claude Giroux almost scored the first “Michigan” or scoop goal in the NHL. Crazy to consider the skill required to pull this off with other NHL’ers defending you but it’s only a matter of time until someone pulls it off.

I’m convinced someone is scoring this very soon. So many close attempts!

After Conor McGregor delivered a motivational pregame speech to the Bruins’ players, Brad Marchand scores the OT winner versus the Columbus Blue Jackets and does the trademark Conor McGregor strut as his goal celebration. So epic.

Brad Marchand doing the Conor McGregor celly is so Boston. 🍀

Wtf is going on in this coach’s head as he attacks players with a stick in tournament game outside of Mississauga, Ontario?!

Fortunately, to regain our faith in youth sports, Schwartz witnessed and captured two Pittsburgh high school teams hug after a double-overtime Penguins Cup semi-finals game. Both teams, Peters Township (where the entire podcast crew attended and played) and Mt. Lebanon have a number of players that have grown up playing alongside each other for travel teams and against one another for high school hockey. What an awesome display of sportsmanship and respect.

Unfortunately, HPC podcast co-host Kyle Kittelberger is still leading the pack for March. We’re all praying someone can overtake his 6 point lead heading into the final stretch of the month in the race for the free HPC XV3 hockey stick.

As usual, the boys picked 3 of their 9 picks for this week’s Weekly Picks. Here are screenshots of Rubeo’s 3 Weekly Picks selections made on this week’s podcast (note: Kittelberger’s profile and score are highlighted as the current month leader): 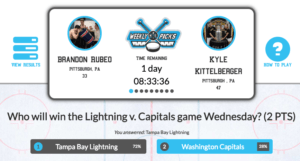 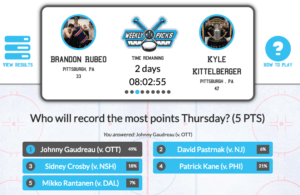 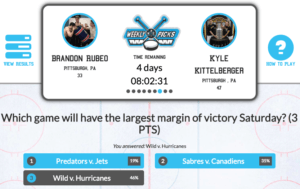 Schwartz brought the heat for this week’s Top Shelf Trivia. With Kucherov on pace to set the all-time record for most assists in a season by a winger, Hockey Players Club co-founder and podcast co-host Matt Schwartz brought up a list of the best “assist-seasons” since 1980 by an NHL winger. In typical fashion, Kittelberger won the trivia but was stumped a number of times. Rubeo and Kustron simply embarrassed themselves.