Unbeknownst to Kustron and Schwartz, Rubeo turns the mics on early to record their lackluster acapella skills. Before Kus lets the listeners know we’re testing recording the podcasts on video and please don’t be startled by his grey beard. Kitts, Schwartz, and Rubeo briefly celebrate last week’s beer league W after the previous week’s shellacking. And fortunately for Kitts‘ other team, “Munson” (mentioned in episode 23) didn’t show up but neither did their goalie… and yet they still won?! Is that the most embarrassing and frustrating way to lose a hockey game?

The podcast crew, being the jackasses they are, mistakenly report Patrick Kane recorded his 1,000th NHL point. To be clear, he did not lol.

The NHL announced their Global Series for next season to showcase the brand and game in Sweden, Switzerland, Germany, and the Czech Republic.

The NHLPA released the results of a 500+ player poll of the best and worst around the league.

Given our recent #hockeytough Instagram post, Schwartz wants to know if all adult leaguers should wear cages?

Did you see the fan that challenged Ottawa Senators forward Brady Tkachuk to a “floss off?”

And the most polarizing goalie mask ever created took the internet by storm this past week:

At the time of recording episode 24, two Weekly Picks questions for 7 points were still up for grabs Sunday evening. But, by Monday morning a weekly winner was crowned:

In accordance with the Weekly Picks tiebreaker rules (most points earned this season is the first tie-breaker), Matt Crebo wins a free $20 HPC gift card.

HPC podcast co-host Kyle Kittelberger is still leading the Weekly Picks for March. We’re begging for someone to overcome his 5 point lead heading into the final week of the month in the race for the free HPC XV3 hockey stick.

As usual, the boys picked 3 of their 9 picks for this week’s Weekly Picks. Here are screenshots of Rubeo’s 3 Weekly Picks selections made on this week’s podcast (note: Kittelberger’s profile and score are highlighted since he is the current month leader): 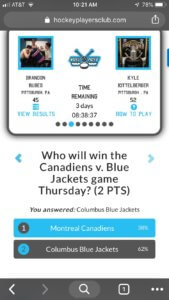 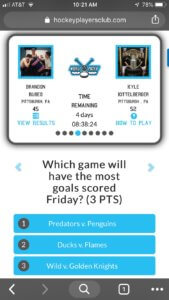 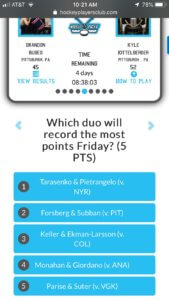 Rubeo brought the heat for this week’s Top Shelf Trivia. With teams making their final push to qualify for the NHL playoffs, Rubeo gathered the top scoring NHL players since January 1, 2019.