Ho hum. Another sick goal from @mcdavid97. Put it between his legs so quickly you need slow mo to appreciate the filth. #ewyounasty

Schwartz reports one of his 13-year-old power skating students is now listening to the pod, scaring Rubeo.

*Schwartz and Rubeo also own and operate Quest Hockey in addition to the Hockey Players Club.

And Kittelberger provides a Munson update from his other beer league team (where he plays defense instead of goalie) before the boys get into NHL action.

Johnny Gaudreau, Elias Lindholm, Sean Monahan, Matthew Tkachuk, and Mark Giordano give the Calgary Flames five 70+ point scorers. The Flames are the first team since the 2000-2001 Pittsburgh Penguins (Jagr, Kovalev, Straka, Lang, and Lemieux) with that many 70+ point scorers.

*With Lemieux recording 76 points in only 43 games that season, Rubeo suggests he like to blow him?! Leaving everyone confused…

Connor McDavid & Leon Draisaitl are the first teammates to hit 100 points since Alex Ovechkin and Nicklas Backstrom did so in 2009-2010. One major difference: the Caps not only qualified for the playoffs in 2009-2010, but they also won the President’s Trophy. Just a little different from Edmonton’s position.

Onto someone that never has a problem scoring goals…

Alex Ovechkin scored his 50th of the season, his 8th season hitting the milestone. One more season recording 50 and he’ll tie Gretzky and Bossy for most 50-goal seasons ever.

With the playoff picture becoming more clear, Kitts reminds the crew who missed the playoffs last year and has already clinched or is poised for a postseason birth this season. With that in mind, Rubes (Canucks), Kus (Oilers), Schwartz (Blackhawks), and Kitts (Panthers) make their predictions for what non-playoff teams this year will rebound next season.

Via Twitter, Hurricanes captain Justin Williams announced last Thursday night would be the last Storm Surge celebration. Therefore, no more crazy celebrations for the last two regular season or any playoff games… but then they did it Saturday night?! We’re confused.

Regardless of the outcome tonight, this will be our last storm surge of the season. It has been an absolute treat celebrating victories with our @NHLCanes fans and muddying up the waters a little bit. We’ve created a buzz again in Carolina but we know ultimately we’ve done that

Is Dallas Stars’ right-winger Valeri Nichushkin the definition of an “empty jersey?”

That is an insane stat. pic.twitter.com/c6dK3gJyJZ

Paul Byron dropped the mitts with MacKenzie Weegar after delivering an illegal headshot to Weegar earlier in the year resulting in a 3-game suspension. In an obvious size mismatch, Weegar dropped Byron, who hasn’t played since, making the boys ask, is “the code” still valid? Do we want more guys with concussions? And didn’t Byron’s suspension already punish him for the illegal check? Byron’s agent certainly thinks so. What say you??

In January, Canadiens’ forward Paul Byron (5’9, 163 lbs) was suspended three games for a head shot to Panthers’ defenseman MacKenzie Weegar (6’0, 200 lbs). Tonight, Byron answered the bell and Weegar got the best of him. Byron did not return to the game after the fight. Thoughts?

The NCAA hockey tournament is underway. Who yinz got?

Devan Dubnyk alertly rushed to the bench to get an extra attacker after his net was hit off its pegs last week. But is it a smart play? His bench was certainly confused…

Sound on 🔈 Brian Boucher explains why Devan Dubnyk decided to go to the bench when the net went off its moorings.

Damien Brunner (who had brief stints with the Red Wings and Devils) cartwheeled the opponent’s net after scoring a goal in the Swiss league. Schwartz expects someone to take grave offense.

The pregame ritual of Golden Knights’ forward Ryan Reeves is a bit rough, wouldn’t you say? Maybe the one downfall of being an NHL coach in Vegas…

And a fan and newbie goalie DM’d the HPC Instagram seeking tips to learn the position. Matt turned the inquiry to our amazing following to provide their insights. Plus, Kittelberger offers some sound advice on the podcast after many years of getting scored on.

At the time of recording episode 25, two Weekly Picks questions for 5 points were still up for grabs Sunday evening. But, by Monday morning a weekly winner was crowned: 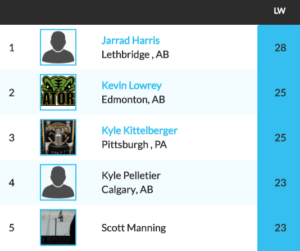 Unfortunately for all, HPC podcast co-host Kyle Kittelberger won the free HPC XV3 hockey stick for leading the Weekly Picks for the month of March with 79 points. What a dick.

As always, the Hockey Players Club podcast crew picked 3 of their 9 picks for this week’s Weekly Picks on the pod.