Schwartz visits his younger bro at Michigan State University this past weekend, checks out a DII ACHA game, and has one shitty experience after the MSU-PSU football game. 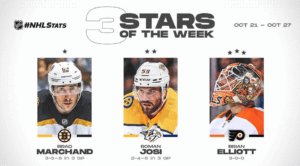 Brian Elliott, Roman Josi, and Brad Marchand were named the NHL’s 3 Stars of the Week.

With Elliott’s game of late, will he take over the starting job in Philadelphia or will he continue to share the net with Carter Hart?

Adding to an amazing week statistically, Roman Josi signed an 8-year extension with the Nashville Predators for over $72 million.

And not only did Marchand throw up 8 points last week, his line (Pastrnak and Bergeron) combined for 13 points alone on Sunday versus the Rangers!

Ray Ferraro and other analysts are calling the Marchand – Bergeron – Pastrnak line the best in hockey today. So, naturally, the HPC podcast crew had to debate who they believe is the best line in the NHL right now, aside from the Bruins. 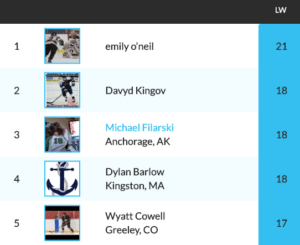 And with 10 points on the board for Wednesday and Thursday night’s NHL action, Jesse Lemery sits atop the Hockey Players Club Weekly Picks leaderboard for October. Whoever finishes the month with the most points will take home a FREE HPC X1X hockey stick! 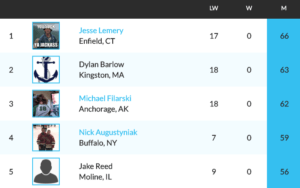 And earn just 1 point in October and you’re entered to win a free autographed Jack Eichel jersey, compliments of the home of the best memorabilia on the planet, AJ Sports World.

And since no episode would be complete without some trivia, the boys played a round of “Win Kyle’s Money” with the all-time Weekly Picks leading scorer, Mike McMullen.