Brad Marchand, Connor McDavid, and Brock Nelson were named the NHL’s 3 Stars of the Week. 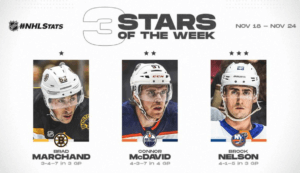 Connor McDavid extends his point streak to 11 games, the second-longest of his NHL career.

Meanwhile, Jack Eichel extends his point streak to 5 games and now has 14 goals and 16 assists in 24 games played this year? Do you think he can score 40 goals? Or top 100 points for the first time in his career?

More news regarding the Babcock firing: Mike Babcock made a then-rookie Mitch Marner list his TOR teammates from hardest to least-hardest working player and shared the list with his teammates.

And what is causing the gluttony of comebacks in the NHL this season?!

IT’S NOT TOO LATE: earn at least 1 point in Weekly Picks in November and you’re entered to win a free autographed John Gibson jersey, compliments of the home of the best memorabilia on the planet, AJ Sports World.

Paul Daley, center for Deutsche Bank in New York (after 4 years at Penn State) won a 3-way tie for a free HPC gift card for leading all Weekly Picks scorers last week with 23 out of a possible 30 points: