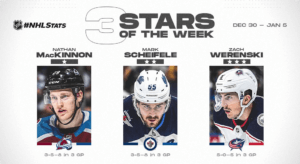 After getting blown out by the Russians in the prelims, Team Canada comes from behind in the World Junior Championship to win gold.

Dallas forward Corey Perry was ejected and later suspended less than 3-minutes into the game for elbowing Ryan Ellis.

And although the Stars went down 2-0 early, they battled back to win the game 4-2.

In unsurprising news, Justin “Mr. Game 7” Williams re-signed with the Carolina Hurricanes for the remainder of the season.

More and more NHL players are electing to skip the All-Star Game. When does this become a problem?

The Penguins AHL goalie, Casey DeSmith, misses a call up due to a lost passport… or did he not want to make a day trip to Montreal, per Kittelberger’s conspiracy? Either way, it hasn’t stopped the Penguins from plowing ahead, even with a slew of injuries to key players.

And since it’s the midway point of the NHL season, the boys revisit their preseason predictions, including Cup Final matchup, Art Ross, Maurice Richard, Vezina, Norris, and Calder trophy winners.

Congrats to Erich Kwaloff of Frederick, Maryland for scoring 25 out of 30 possible points last week, winning himself a free $20 HPC gift card.

Being the first week of the month, he also currently sits atop the Weekly Picks January leaderboard. If he can keep this up he’ll be taking home a free HPC X1X hockey stick. 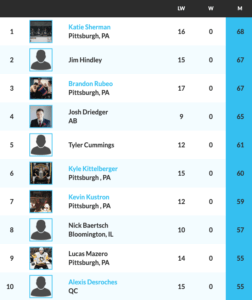 This week, former NHL hockey player, Christian Hanson has a valiant effort, scoring 6 of 7 questions correct, but was it enough to defeat podcast-savant, Kyle Kittelberger? Listen and learn…

Canadiens toss life preserver, but fate is still in Kovalchuk’s hands
The NHL’s 2019-20 50-Goal Race At the Midseason Point