Sidney Crosby returned to the Penguins lineup after a 28-game hiatus in vintage-Crosby fashion.

Penguins defenseman Marcus Pettersson signs a 5-year extension with the Pens. Rubeo points to a Reddit post about how differently contract discussion has gone with Kevin Labanc (San Jose Sharks) and Pettersson, considered comparable defensemen who were both restricted free agents this summer.

Patrick Kane recorded his 1,000th NHL point on a secondary assist of Brandon Saad’s goal against the Winnipeg Jets. The boys debate whether Kane will be considered the best US-born hockey player of all time.

Jack Eichel scored his career-high 29th goal with 32 games left in the regular season. Can he hit 50??

Class act, Elias Pettersson donated $10k from his All-Star Game winnings to the Parkinson Society of British Columbia and Minnesota in honor of Brock Boeser’s dad.

Speaking of the All-Star Game…

The podcast crew loved the Elite Women’s 3-on-3 Game, showcasing an abundance of skill. But as Kitts pointed out, the NHL probably would’ve like more scoring.

They also thought the “Shooting Stars Challenge” where players shot pucks from the stands at targets on the ice was a bit hokey. And considering all the contestants made a pact to only shoot at the 10 point target, it was rather monotonous.

And in the AHL All-Star game, Martin Frk did the unthinkable, breaking Zdeno Chara’s record for the hardest shot at 108.8 mph. Somehow, with a 70 flex stick, Frk ripped a 109.2 mph bomb.

And before getting to Weekly Picks the boys predict their division champs and President trophy winner.

Congrats to Josh Driedger of Alberta for scoring 24 out of 30 possible points last week, winning himself another free $20 HPC gift card! 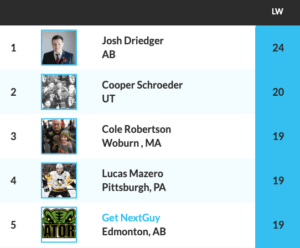 Kevin Trussler of Land O’ Lake, Florida sits atop the Weekly Picks January leaderboard with 17 points remaining up for grabs in January.  Whoever ends up on top will be taking home a free HPC X1X hockey stick.

This week, HPC co-founder and pod co-host, Brandon Rubeo takes on Kittelberger. Proving a worthwhile opponent, he tied Kittelberger’s score, but who answered the questions in the shortest amount of time?? Listen and find out 🙂