Stephen Johns snipes an emotional return to the Stars lineup, Ovi continues to do Ovi things, and what if a shorthanded goal killed the penalty? And more… 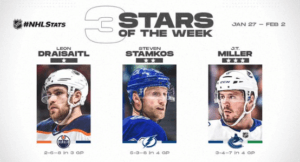 While we’re aware of some fishy rumors surrounding our team name, please rest assured we’re doing our due diligence by scouring the depths of the ocean, the tallest mountains, and the densest parts of the forest to find the right name for our great, green city.

After a long battle with post-traumatic headache issues, defenseman Stephen Johns returned to the Dallas Stars lineup and proceeded to snipe a one-timer blast from the point. Congrats, Stephen, and welcome back to the show!

With Aleksander Barkov out, Florida Panthers defenseman Mark Pysyk was called upon to play forward against the Toronto Maple Leafs. Not wanting to disappoint, he scored his first career hat trick on the way to a Panthers win!

Alex Ovechkin somehow continues to his torrid scoring pace. Not only has he recorded 14 goals in his last 7 games…

Is that good? (via @nhlonnbcsports)

He scored his 3rd hat trick in his last 6 games. And did we mention that natural hat trick tied the game against the Kings with just 6 minutes left in the third before he proceeded to bury the game-winner and empty netter to seal the victory?!

Finally, it appears the Jets and Dustin Byfuglien drama is coming to a close, as rumors report the two parties are working to terminate the defenseman’s contract. And we’re thankful Patrik Laine is known for his honest opinions…

Referencing his favorite hockey podcast, 31 Thoughts (besides our’s of course), Kittelberger posed the question to the boys: if you could add or change any NHL rules, what would they be? Once Schwartz, Kus, and Rubes gave their opinions, Kittel had a thought-provoking suggestion: if a team scores a shorthanded goal, they’ve successfully killed the penalty.

Congrats to Ryan Maker and Zack Ridlon for scoring 25 out of 30 possible points last week, each winning a free $20 HPC gift card! 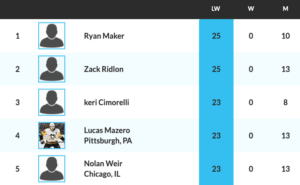 And congrats to Kevin Trussler of Land O’ Lake, Florida for winning a free X1X hockey by leading all Weekly Picks participants in January with 73 points!

With plenty of points ahead of us in February, 4 players sit atop the Weekly Picks February leaderboard.  Whoever ends up on top will be taking home a free HPC X1X hockey stick. 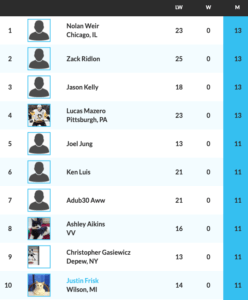 This week, Rubeo’s old PSU teammate Justin Depretis took on Kyle for one hell of a battle. Little did either know Schwartz was bringing some tough questions, with the winner only guessing 3 correct. Who won? Listen and find out 🙂