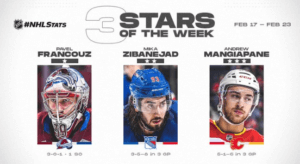 Alex Ovechkin became the 8th player (naturally as the great 8) in NHL history to score 700 goals. Not only were the fans privileged to witness the historic goal, but the NHL also mic’d him prior to the game to capture his and his teammates’ reaction.

And Gretzky is pulling for Ovi to beat his record mark!

Adding to the crazy week in the NHL, Zamboni driver who doubles as an emergency backup goalie David Ayres was called into action for the Hurricanes against his hometown Maple Leafs. Initially allowing goals on his first 2 shots against, Ayres buckled down and recorded 8 saves for his first, and likely only, NHL victory. What a story.

And the boys rallied around him and celebrated like clinching a playoff spot.

David Ayres: “I had the time of my life out there.” #stuffoflegends

This year’s NHL tradeline did not disappoint with a plethora of moves made around the league. The boys picked the teams they felt had the best deadline and those who stunk up the joint.

What’s up with a hockey dad throwing a trash can on the ice during play at a youth hockey game?! Get a grip, guy!

This week marks the 43rd anniversary of the legendary movie, Slap Shot. What’s your favorite quote?

What’s your favorite line from “Slap Shot?” COMMENT BELOW!

And Matt wants to clear up some debate… do you call the tape that fastens your shin pads clear tape or sock tape? Let us know your vote and comment on our Instagram post.

Heated debate. What do you call it? COMMENT BELOW. 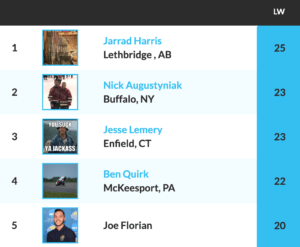 And we regret to report podcast co-host Kyle Kittelberger sits atop the Weekly Picks February leaderboard.  If he can hold on he’ll be taking home a free HPC X1X hockey stick. We’re rooting for you 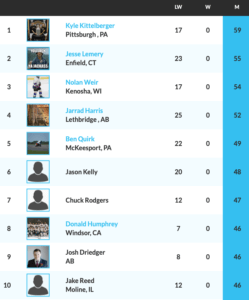 Adult B-leaguer, longtime HPC member, and Weekly Picks legend (1,144 points all time!) Michael Jacobi signed up for the challenge of defeating Kittelberger. Did he have what it takes to hand Kyle his second defeat of the season? Listen and find out 🙂

Six Teams That Need a Big Move Before the 2020 NHL Trade Deadline
After Completing 100 Days of Sobriety and in his First Game Back in Ottawa, Bobby Ryan Scored a Hat Trick