Johnny Boychuk took a skate to the eye resulting in 90 stitches, the Philadelphia Flyers now have the best odds of winning the Stanley Cup, Quinn Hughes doesn’t think any rookie has been better than him the last 30 games, Leon Draisaitl continues his record-breaking season and Bobby Ryan’s emotional triumphant return to Ottawa after an extended hiatus. 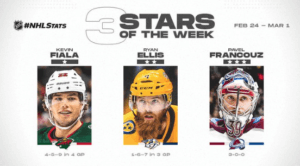 Kevin Fiala, Ryan Ellis, and Pavel Francouz were named the NHL 3 Stars of the Week.

Leon Draisaitl can’t stop, won’t stop! The German man-rocket recorded his 100th point this past week, for his second consecutive season hitting the century mark… and supplanting himself as a legitimate MVP candidate.

After completing 100 days of sobriety and in his first game back in Ottawa, Bobby Ryan scored an emotion-filled hat trick! The hockey community is rooting for you, Bobby!

Shane Wright of the Kingston Frontenacs is living up to his exceptional-status hype! Over the weekend the teenager tied Connor McDavid’s OHL underage rookie record of 66 points, scoring a natural hat trick and recording an assist. And it took Shane 9 less games than Connor!

And according to NHL insider Darren Dreger, the NHL is looking to update its offsides rule to minimize replay confusion:

After 3 years of discussions, it appears the NHL will amend the offside rule. Skate in the air…or breaking the plane is expected to be part of the change.

Congrats to Nolan Weir, of the Wisconsin Jets, for scoring 71 points in February, edging out HPC pod co-host Kyle Kittelberger by 2 points to win a free X1X hockey stick! 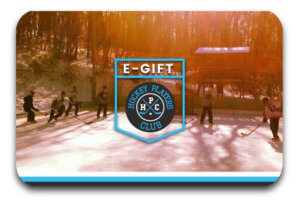 Get your Weekly Picks in and take your shot at winning a free gift card or HPC X1X hockey stick if you sit atop the Weekly Picks March leaderboard.

Adult League goaltender and high school hockey coach Tony Crugnale from Pittsburgh, PA was this week’s contestant.  Did he have what it takes to hand Kyle his second defeat of the season? Listen and find out 🙂