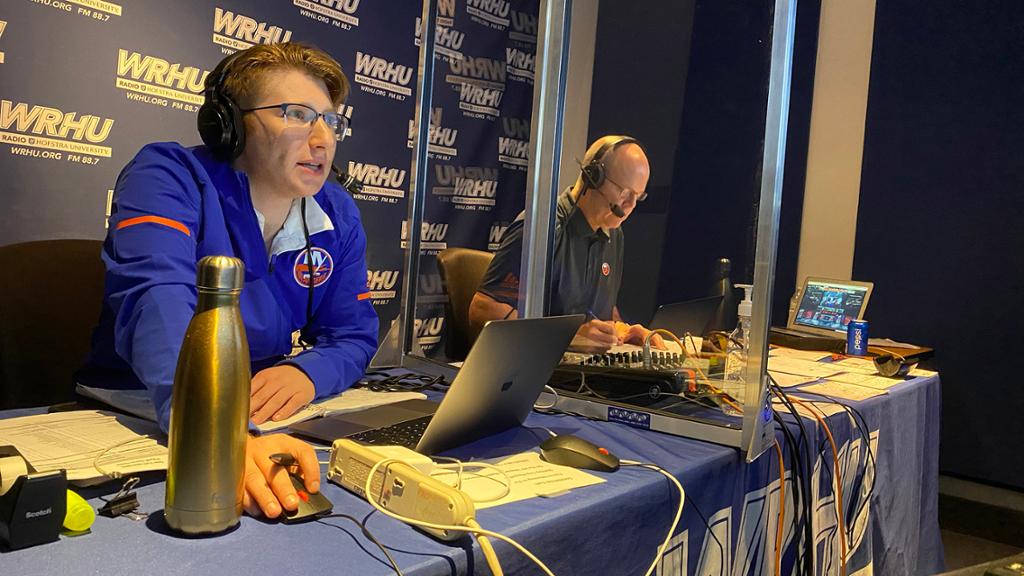 Inside the studios at WRHU, the Islanders radio broadcast team of Chris King, Greg Picker, and their accompanying producers have established their own little hub where they call Islanders Playoff games remotely from Hofstra University.

During the games, King and Picker sit on opposite sides of a 12-foot long table and watch a pair of 55-inch monitors. Due to COVID-19 they sit with a plexiglass partition between them.

500+ miles separates King and Picker from the action in Toronto, but that hasn’t stopped them from delivering the excitement of playoff hockey on the radio.

Case in point: the video that has surfaced from their call from Tuesday’s double-overtime winner:

We got a little excited on the call of last night’s 2OT winner…#Isles pic.twitter.com/vT7u7Abrsa

I’ve watched this video at least one hundred times now.  I could dissect every detail because I love it so much.

First, Picker’s face says it all.  Nerves and anguish.  Double overtime will do that to you and to this point in Game 5, the Isles could have lost multiple times. 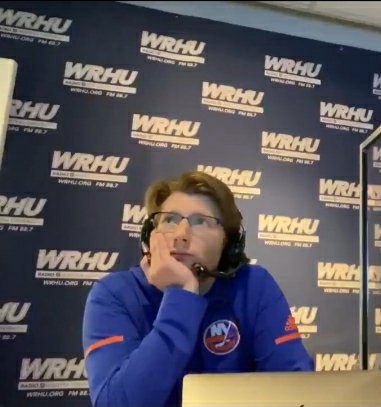 Then, a look of excitement and optimism as Anders Lee pokes the puck past Kevin Shattenkirk and the Isles look to have a clear two-on-one.  Picker adjusts himself in his seat and stands with excitement.  As Eberle deposits the puck into the net and wins the game for the Isles, he jumps in the air with both hands extended above like a ten-year-old who just saw his favorite player score.

This is quickly followed by a triple fist pump that would make Tiger Woods proud.

Chris King’s call on the play was Hall-of-Fame worthy. The description and conciseness of the call was spot on.

“Right point Shattenkirk the blast, blocked out high. Islanders might have a two-on-one here. Lee through the left circle he’s with Eberle down the middle, feeds him, shoots…HE SCOOOOOOOORES. Jordan Eberle has won it in double overtime on a great feed from the captain. The Islanders win it 2-1. They stave off elimination and there will be a game 6 on Thursday night!”

If I were an Islanders fan this would be my current ring tone. What a great call. You have to love the energy King brings with this call and the pure elation in his voice. Hell, he hit some octaves that would make Christina Aguilera proud.

The video show King with double fists clenched in excitement as he notes there will be a Game 6. The entire call is capped off with an amazing Dad-like fist pump that, unfortunately, radio doesn’t capture.

It’s the cherry on top of an absolutely electric call between two guys 500+ miles away from their beloved Islanders. And unless you were told otherwise, you’d think they’d be right there in the bubble with them. I can’t wait for Game 6 tonight and potentially another epic call.