It is the prize of all prizes. Lord Stanley…The Holy Grail…The Stanley Cup. After first being awarded in 1893 to the Montreal Hockey Club, the Stanley Cup has been handed down each year to the winner of the National Hockey League since 1927. It is the trophy that EVERY hockey player dreams about winning since birth.

Unlike the rest of the big four professional sports in the United States, the trophy stays the same each year. This gives the Stanley Cup history and character that can’t be matched by the NBA, MLB, or NFL. Over the course of the hundred-plus years of Lord Stanley, thousands of hockey players, coaches, and personnel have had their chance to raise the cup and a tradition began where each player gets a day with the cup.

Hockey players are notorious for being characters and it’s no surprise that the Stanley Cup has found itself in some crazy places as a result.

After winning the franchise’s first Stanley Cup in 1991, the Pittsburgh Penguins and the city celebrated like there was no tomorrow. During the course of the celebrations, the cup ultimately made its way to Mario Lemieux’s house where a discussion broke out about whether or not Lord Stanley would float. Phil Bourque decided to see for himself and abruptly jumped into the pool with the Cup. It instantaneously sunk to the bottom and a suction force was created that kept it at the bottom. Players took turns diving to try and get it back up. The story is so legendary that there is a book about it, Why Is the Stanley Cup in Mario Lemieux’s Swimming Pool? 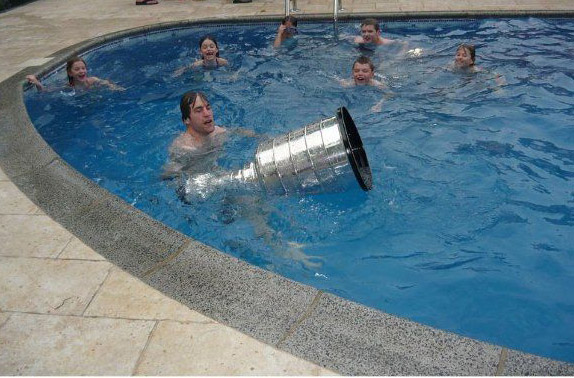 The Stanley Cup has made its way into being the little spoon in many players’ beds, including Sidney Crosby. However, legend Steve Yzerman did something much cooler. After winning the cup with the Red Wings in 1997 Steve decided to rip his clothes off and take Lord Stanley into the showers with him. What a mental image.

Getting baptized in hockey’s Holy Grail automatically qualifies you for sainthood. For two individuals over the course of the Cup’s history, that has happened. Tomas Holmstrom’s, cousin’s, daughter (holy hell) and Sylvain Lefebvre’s daughter were both baptized using the Cup as a Baptismal font. 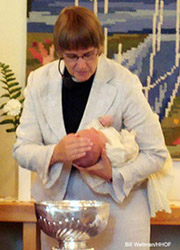 Mark Messier is an absolute beaut and hockey legend. The only thing better than his on-ice performance is his performance with the Stanley Cup. Mark was notorious for taking the Stanley Cup to some of the nicest gentleman’s clubs around Edmonton and New York City. In 1987 he took the Cup to a strip club and set it on stage, where the local talent incorporated it into their nightly routine. Talk about an epic Cup Story. Having won six Cups, it’s safe to say there may still be some sparkles on the Cup thanks to Mark Messier, Candy, and Destiny.

In 1940 the New York Rangers won the Stanley Cup. The details of the origin of the fire are shaky, but somehow the Stanley Cup caught on fire. With no suitable water or extinguisher in sight, the only logical thing for the players to do was urinate on the Cup to extinguish the fire. This may be the first and only time the Stanley Cup messes with fire and human urine during the same night. Now that we’ve established the Cup has been peed on/in, it’s worth noting that countless players and family members have eaten cereal from the Cup. How’s that cereal taste meow?!

Hockey player and huge horse racing fan Eddie Olczyk won the cup with the Rangers in 1994. Mixing his love for horses and hockey, he decided to take the Cup to the Belmont Stakes, the third leg of The Triple Crown. While there he decided that just showing it off wasn’t enough. He took the Cup to the stables and fed the Kentucky Derby winner, Go For Gin, out of the Cup.

The Day the Stanley Cup Was Stolen

A huge piece of NHL history that is unknown by most is the story of the stolen trophies at the Hockey Hall of Fame in Toronto. In 1962, the Stanley Cup, Conn Smythe Trophy and Bill Masterson Trophy were stolen. This occurred after the original Stanley Cup was retired and placed on display at the Hall of Fame. After a thorough investigation, the Conn Smythe and Masterson trophies were recovered. However, the Stanley Cup would remain missing for seven years until an anonymous tip led the Stanley Cup to being found in a Toronto cleaning store “wrapped like a Christmas present.”

Kris Draper may take the cake for craziest place a child poops. After winning the Stanley Cup, he had placed his newborn daughter in the Cup. Upon lifting the baby up, Draper discovered that his daughter had pooped inside the Cup. Don’t worry…. He made it a point to let us know that he cleaned it out and drank out of the Cup that night. Thanks for clearing that up for us poop breath. 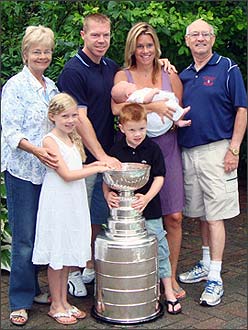