No matter where you’re from or what nationality you are, everyone is Irish on Saint Patrick’s Day. Hockey has a long history with St. Patty’s Day involving green jerseys, green ice, alcohol, and a little bit of luck of the Irish.

Before you tear apart your closet to find the one piece of green clothing you own and rush down to Paddy’s Pub to throw back copious amounts of Ireland’s finest (Jameson and Guinness)….let’s step back and take this moment to reflect on why we’re lucky to be hockey players.

First up…”hockey butt.” I mean, come on, who doesn’t enjoy a nice muscular rear end? Easy on the eyes and a pleasure to pet, hockey players have some of the greatest keisters in the league…and you can’t teach that! There’s not a sport that holds its players more accountable than hockey. Although you might not always get called for the penalty, hockey has a good system of payback. Players always remember a number and it may not happen today, tomorrow, or next week, but eventually you’ll face reality and will be forced to “answer the bell.” What goes around, comes around.

The brotherhood of hockey is in a league of its own. Not only does it have its own language, it has a special bond that can never be broken and it results in teammates feeling more like brothers.

A lot of hockey players start playing from the time they can walk.  Many pick it up as a hobby at some point in their adolescent or adult lives.  No matter when you started playing, most hockey players continue to play until they’re physically unable to, which can be well into your 90’s!  At some point, you simply fall in love with the game.  The cold crisp air, the sound of your skates scraping and tearing through the ice and an open canvas of ice for you to glide around on.  When you’re out on the ice, nothing else matters.  Hockey is a magical game and the love hockey players have for it is hard to describe.  If you’re a hockey player, you know what we’re talking about. Chicks dig a cute smile and hockey has been creating them since its inception.

Playoff beards, throwing hats on the ice after a hat trick, stick taps, the Stanley Cup, the handshake line, team cellys…these are just a few of the great traditions specific to hockey that we’re lucky for.

Nothing teaches you better work ethic than hockey. Many argue NHL players have the best work ethic in professional sports.  The early morning and the late night practices, numerous weekends away from home, off-season workouts, lifting regiments, and living and breathing hockey. Collectively, these things all help shape you into the person you are. They help instill discipline and work ethic thanks to the game, your coaches, and your teammates.

Fighting has long been a part of professional hockey.  Despite some dissenters who argue that hockey should ban fighting, many still enjoy watching players drop the mitts for a good old fashioned tilt.

Check out our list of the 10 greatest hockey fights ever.

Hockey’s life blood. Make sure you don’t succumb to the scourge of green beer today.  And don’t forget to bring the beer to your next adult league game. 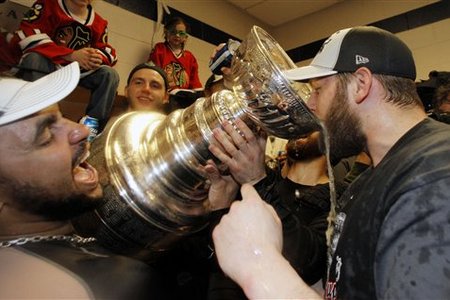 So time for your answer? What are hockey players most lucky for? Comment below telling us who and why.

Would You Rather Start A Franchise with Laine or Matthews?
Official Guide to Proper Hockey Locker Room Etiquette