If you are a Beer League hockey player, then surely hockey is your favorite game. Whether it’s the speed, physicality, finesse, or camaraderie, you understand nothing else quite compares.

But then again, who doesn’t love a good ol’ drinking game? Some friendly (well usually friendly) competition, a reason to drink, and endless laughs make for a deadly combination. And hey, it typically includes ice too!

So here at the Hockey Player’s Club, we decided to combine our two favorites: hockey and drinking. We present to you the Official Beer League Hockey Drinking Game! 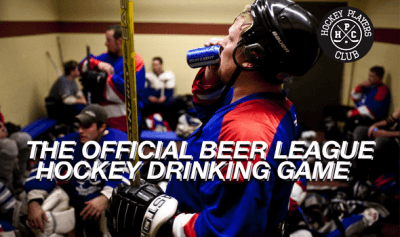 Here are the ground rules. If any of these rules apply to you…you may want to change your ways.  “Take a drink” = an honest and reasonable sip of one’s favorite bevy.

1. As soon as you get to the locker room grab yourself a brew. At this age you don’t stretch to loosen yourself up, you just get a little buzz going.

2. For any guy that shows up within 5 minutes of game time, take a drink.

3. If your goalie fails to show up and you have to ask to borrow one from the D league game before you, shotgun a beer. This could be rough and you’re going to need it.

4. If you forget a piece of equipment, take a drink. Then, tape an extra sock on that elbow because you still have to play.

5. If you have to ask the room “who has tape?”, take a drink. Bring your own next time!

6. If you accidentally go onto the ice with your skate guards on, shotgun a beer to get rid of the embarrassment.

7. If your team gets scored on in the first minute, take a drink because clearly you didn’t come ready to play.

8. If a player on your team gets absolutely undressed, take a drink because you are better than that.

9. After each period take a drink for every goal scored against your team. You need to stay hydrated out there.

10. If a player on your team is on a breakaway and falls…you guessed it, take a drink.

11. If anyone on your team hits a post, take a drink just because that stings.

12. If you end up in the sin bin, take a drink in punishment because you have no coach to yell at you anymore.

13. Take one drink for every player on the other team with either a tinted shield or white gloves. If there is a player with both drink half your beer to stop yourself from laughing at him.

14. If you got someone to actually come watch you play, then everyone else on your team has to take a drink because you are cooler than them.

15. If you actually got someone to come watch you play, then take a drink because it’s beer league bro.

16. Every time someone yells at the ref for something pointless, take a drink.

17. If the shitty guy on your team scores a goal, take a drink to help him celebrate since it doesn’t happen often.

18. If someone takes a slapshot from inside the hashmarks, everyone drinks.

Finally, and most importantly, if you win the game then have a beer in celebration. If you lose the game have a beer to wash away the sorrows. Because remember, it is called Beer League for a reason, win or lose, we booze!

What do you hockey beauties think? What’d we miss or get wrong? Comment below so we can collaboratively build the ultimate Beer Leauge Hockey Drinking Game. Cheers!