Hockey is the best sport in the world for many reasons. But one of the biggest reasons we all love the game so much is because of the passion. The passion of the players, coaches, and most importantly, the fans that make the game all that it is. When you go to a hockey game, you will see many different levels of passion from many different types of fans.

Here at the Hockey Players Club we have broken down the different types of fans you will see at a hockey game, so that you know who to associate with, and who to steer clear of. 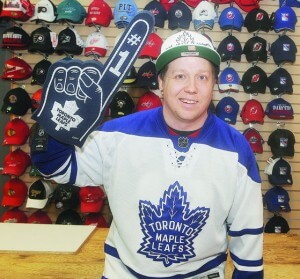 This is an older person who is somehow attending their first game ever. You can tell because they come to the game with fresh bought gear that still has the tags on it. Also they are probably wearing a jersey that has no name on the back because they didn’t know anyone on the team. Steer clear of these people. They will ask you really basic annoying questions which will end up ruining your game experience. 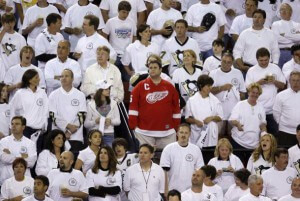 This is another fan you should probably keep your distance from. Not only will their incessant cheering for the other team royally piss you off, but there is always the chance that you end up in a fight with them. For your sake and theirs just sit there and let them watch their team get destroyed while the rest of the arena celebrates. 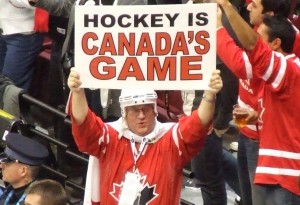 Mr. Canada can be pretty annoying as well. He is Canadian born and bred and feels that the game should only be theirs. He fails to realize that there are a countless number of countries that now play hockey. He also typically hates the US and any US player, especially if they play for a Canadian NHL team. This is another person you should avoid. If you get caught in his trap he will chew your ear off non-stop about how hockey should have stayed in the great white north. 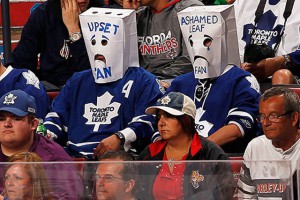 We all feel for this group. They are stuck living in a city where the team is just repeatedly awful. They refuse to root for anyone else because this is THEIR team and next year is definitely their year. Then, when next year comes and they are out of playoff contention by the all-star break, they cheer a little when they lose a game because they know that will make their draft pick better. The best day of the year for them is draft lottery day because they know it’s something they actually might win. 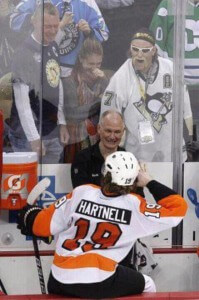 We all know this guy. They buy glass side seats and yells the whole game. They have the crazy notion in their mind that the players not only can hear what they are saying but actually give a shit. These few live and die for the team and want to do anything they can to help, even if that means looking like a complete fool. 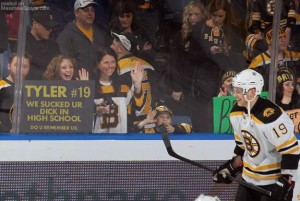 The puck bunny is a rare breed. These girls love the players with all their heart. They go down to the glass during warm ups with their sign just hoping to get a wink or a wave. We all figure their rooms at home are filled floor to sealing with posters of the player of their dreams. They will do whatever it takes to get attention from their favorite NHLer, even though they may go way over the line sometimes… 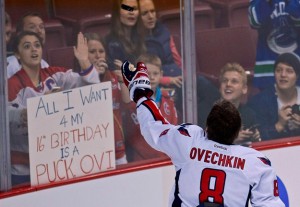 Who doesn’t love when they see this! A little kid eyes wide by the glass during the pre game skate trying to see their favorite players up close. They usually have a sign asking for a puck or saying its their birthday. Occasionally they will ask for even more such as “if you score two goals my dad said he will get me a dog”. Theses are bold moves, you can’t put too much pressure on these guys. I would recommend staying away simply because I think their parents don’t want them talking to strangers. 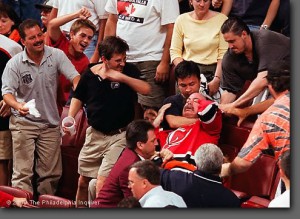 These fans live to hate their rivals and anyone that supports their team. They circle those games on their calendar because they know the arena is going to be rowdy. There is almost a guarantee of strongly worded arguments and fights but hey, if they are doing it on the ice why not do it in the stands too? 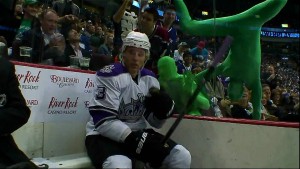 These guys are an exception to the “Fans you Will See at Every Game” title. These passionate individuals confine themselves to two seats right next to the visitors penalty box in Vancouver. Although you don’t get to see them at every arena, the hockey community loves them. Their crazy antics and attempts to get inside the head of the opponents are second to none. That combined with the anonymity of the mask means these two are savages. Thank you for what you do green men. 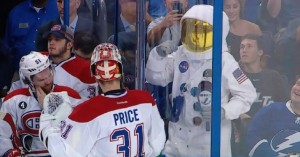 Here is another exception to the title. This guy resides in sunny Tampa Bay. He pays a crazy amount of money to sit right next to the opponents bench and for some reason wear a space suit. I am not really sure if he thinks this messes with the other team or if he is really, really seeking attention. Nevertheless he is usually there giving us a good laugh so for that we thank him. 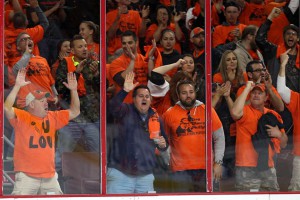 Any time you play the Flyers or Canucks you can expect to see some of these fans. Any fanbase crazy enough to throw electronic bracelets on the ice (Philadelphia), or basically burn down their city after losing game 7 of the Stanley Cup (Vancouver), is basically out of control. These people don’t really care what is socially acceptable and usually do whatever they want because hey, none of us are going to tell them to stop because they are crazy. Steer clear of these folks at all cost. 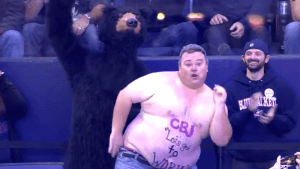 Every NHL team has one…the guy who is known for dancing at every game. He sits in the same spot, wears the same gear, and when his song comes on it is his time to shine. The camera always goes to him and he eats it up! He is on there so much he has become a local celebrity. The top notch dancing guys are even used in the teams local tv commercials. These guys bring energy to the arena and are usually really friendly and love the attention. 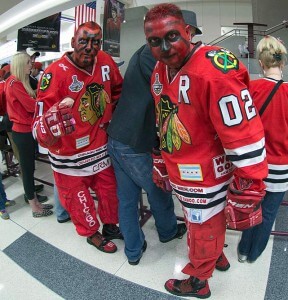 We saved the best for last – the diehard fan. These loyal supporters live, eat, sleep, and breathe for their team. Their season tickets have been passed down through the family for at last 3 generations. They do not own a single piece of clothing that is not in their teams color scheme. Away games within a three hour drive are basically home games, and they will make the trip. These people make hockey all that it is with their passion for the game and their team. Without them, who would we have to put on the jumbotron (beside dancing guy)?