How have hockey sticks gotten so expensive?

Back then, a hockey player could walk into any pro shop or local sporting goods store to find stick racks filled with Sherwood, Titan, Christian, KOHO, and countless other brands offering wood hockey sticks for $25-$30 apiece. 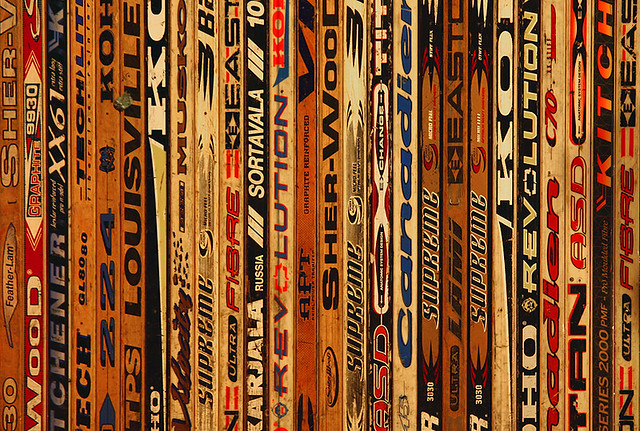 We’ve heard of inflation but what gives?!

Up until Wayne Gretzky’s endorsement deal to use Easton aluminum hockey sticks in 1990, a vast majority of all hockey players used nothing but wood sticks. And it wasn’t until the 1970s the wood stick was upgraded by being reinforced with fiberglass. 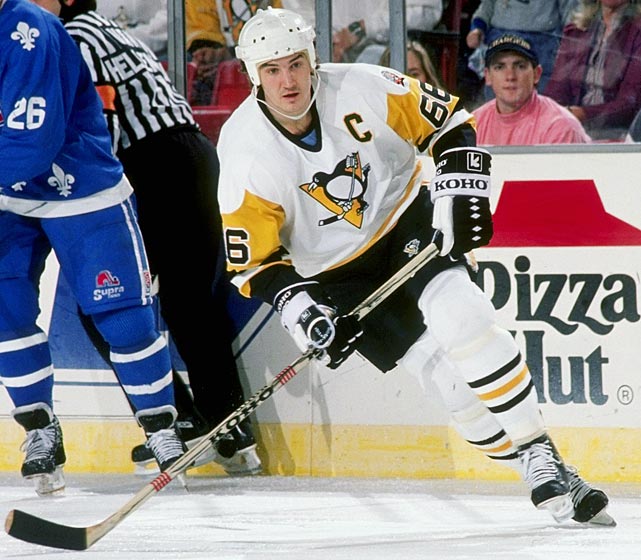 Mario Lemieux using a KOHO wood-fiberglass stick in ‘88-’89 en route to recording 199 points, the highest point total ever recorded by someone not named Gretzky.

“In 1989, Jim Easton, who was a good friend of mine, came to me and said, ‘Wayne, we have this stick for you. It’s a product you’re going to love. We were able to make the stiffness that you like, but it’s only a third of the weight.’ It was a two-piece stick with an aluminum shaft. I loved it. It was still very stiff-a slapshot seemed to explode off the blade. But it was so light that all the weight was in the blade, so you could feel the puck better.”

Thanks to Gretzky’s endorsement and Brett Hull’s 86 goals in the 1990-91 season, aluminum two-pieces took the hockey stick market by storm in the early ’90s… But not for long, as carbon fiber was first introduced for hockey shafts and quickly thereafter for blades in 1995, which Paul Kariya used to score 50 goals.

Then, in 2000, Easton Hockey introduced the first composite one-piece that forever changed the game, the original Synergy. 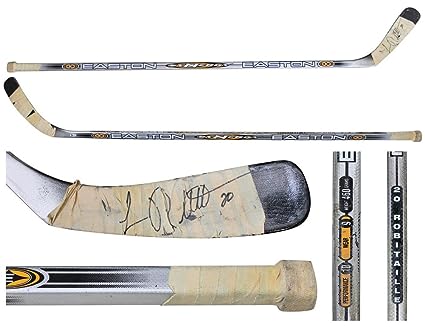 Given the massive reduction in weight and a significant improvement in flex, shot-release, and velocity, roughly 90% of all NHL players were using carbon fiber stick technology by 2004!

“With today’s whippier sticks, guys can load up quickly and shoot off the back foot, which takes a lot less time… Now everyone is using a whippy stick and using the release to fool goalies into misreading the angle. A guy like Phil Kessel uses his stick like a slingshot.” Much to the chagrin of NHL goalies…

“What do I think? Ask any pitcher in baseball if he would want Mark McGwire swinging an aluminum bat. Ask me if I want Al MacInnis swinging a Synergy stick. Of course, I’d say no,” Blue Jackets goaltender Marc Denis says. “Everyone’s shot is harder. You see third- and fourth-line guys letting them rip from the top of the right circle.”

Okay, wood and fiberglass through the ’80s, aluminum and carbon fiber in the ’90s, true one-piece carbon fiber hockey sticks in the 2000s, but why are they 10 times the cost?!

Here are the 4 reasons hockey sticks are so expensive:

It doesn’t take an advanced degree in engineering to know, or at least assume, carbon fiber is a lot more expensive to produce and source than wood or aluminum.

We all understand where wood comes from… right?! And processing aluminum isn’t easy or cheap but it’s affordable enough to use for foil and cans.

Whereas, producing carbon fiber is resource and energy-intensive and therefore originally reserved for industries where performance is far-and-away the #1 priority over cost, like aerospace, defense, and motorsports.

And like other materials, not all carbon fiber is created equal.

Discount hockey stick companies source heavier, brittle carbon fiber. Plus, discount sticks are often times supplemented with sheets of less-expensive materials, not made of 100% carbon fiber layers.  This results in a heavier hockey stick that lacks responsiveness and durability. 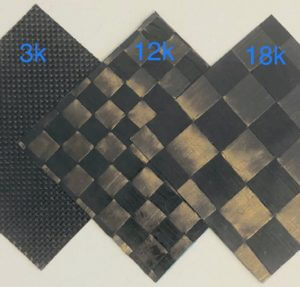 *Trade secret: some “top-of-the-line” hockey stick companies cut weight by shedding layers of carbon fiber, but the very best source cutting-edge materials. For example, the DiamondLight Carbon Fiber used to produce the HPC X1X was originally designed for rocket ships and Formula 1 race cars, where performance and weight are critical, making the X1X incredibly responsive, durable and lightweight – a senior weighs only 375 grams!

*Note: this isn’t being written after a little online research… Instead, we (the founders of the HPC) traveled overseas, China specifically (where 95%+ of all hockey sticks worldwide are manufactured), to see the entire process first hand.

Not only were we blown away with the skill and craftsmanship of the workers, but we were also amazed to see how many people are involved in producing just one carbon fiber hockey stick.

Production of carbon fiber hockey sticks can be broken down into three main stages: design, manufacturing, and decoration.

Last, before packaging and shipping, the one-piece carbon fiber sticks are elaborately decorated over a number of steps, first applying the wrap, then a clear coat, and finishing with the grip.

It is easy to see why one-piece carbon fiber hockey sticks, just between materials and labor, are considerably more expensive than wood and aluminum sticks.

A number of NHL players are paid six-to-seven-figure endorsement deals to promote a brand’s newest model stick. Take for instance Crosby’s 6-year endorsement deal with Adidas (CCM’s parent company at the time) worth an estimated $1.5 million per year.

We’re all hockey players here, no one is mad at the players for getting paid but clearly, endorsements cost the end consumer.

And considering one brand has McDavid, Crosby, Ovechkin, Burns, Tavares, and MacKinnon signed to long-term deals, it’s obvious they have an exorbitant amount of cash committed to endorsements alone. Not to mention the costs of creating the marketing campaigns around these athletes and their massive advertising budgets – all being added to the MSRP of their hockey sticks.

Player endorsements don’t add to the performance or durability of the hockey stick. Instead, all their added cost is used to convince consumers their products are worth a premium. But are they?

Do Sid and Ovi really love their stick more than the next model? How about those million-dollar checks?

Retailers take on considerable overhead expenses (i.e. rent, utilities, wages, etc.) to offer customers the convenience of a product right now (assuming it’s in stock) with only the profit margin of their products to pay the bills.

But if you don’t need a hockey stick this very second, is it worth paying a 50% premium to a middleman?!

Take, for instance, CCM. Their top of the line SuperTacks AS2 Pro retails for $279.99 but cost the retailer $187.00 or even less if they place a large order. Here’s a picture straight out a retail buyer’s guide:

Hockey, like many sports, is a big business with large companies involved.

For instance, Bauer Hockey, once owned by Nike, was part of a sale (which also included Easton) for $575 million to Sagard Holdings Inc. and Fairfax Financial Holding Ltd. investment firms in 2017.

Similarly, CCM was owned by publicly-traded Adidas before being sold to Canadian private equity firm, Birch Hill Equity Partners for $110 million in 2017.

And nothing turns-on big business investors like the prospect of growing profits. And what’s the easiest way to increase profit? Raise prices.

We see the same dog-and-pony show every year: each big name brand announces revolutionary technology that will turn any squirt or beer leaguer into a bonafide NHL 50-goal scorer.

Apparently, their “technology” depreciates faster than a new car.

Thanks to expenses like $300 hockey sticks, hockey is reserved for affluent families with disposable income. The ideal group of people to exploit on price, as performance and quality are priority #1.

But what about the people who can’t drop $300 on a whim? Or those of us that want an elite-performing stick that lasts but without all the added “fluff?” Who likes wasting money anyway?

So, how can someone get an elite performing hockey stick without spending $279+?

Like a great teammate, the Hockey Players Club has your back.

The Hockey Players Club X1X is one of the lightest sticks on the market.  A senior weighs only 375 grams. That’s 15 grams lighter than the Vapor Flylite and $100 cheaper. But we didn’t cut weight by shedding material, instead, we sourced lighter, stronger carbon fiber.

Our 18k DiamondLight Carbon Fiber is incredibly light and undeniably durable and responsive.

Our patented Fast Draw Taper technology combines a low kick flex point and tapered hosel optimizing energy transfer from the shaft to the blade for a lightning-quick release.

Plus, our Durablade System minimizes cracking and chipping by fortifying the edges of the X1X blade with extra layers of DiamondLight Carbon Fiber, resulting in unparalleled durability and a blade that maintains its stiffness for an explosive release over the life of the stick.

Not to mention all the “little details” like double concave sidewalls and grip punchouts on the shaft, and a 3D sandpaper blade finish — all enhancing the player’s comfort and control of the puck.

But, we’ve saved you all the other fluff…

That is how the Hockey Players Club delivers an elite performing stick to your door for $100+ less than the other guys. 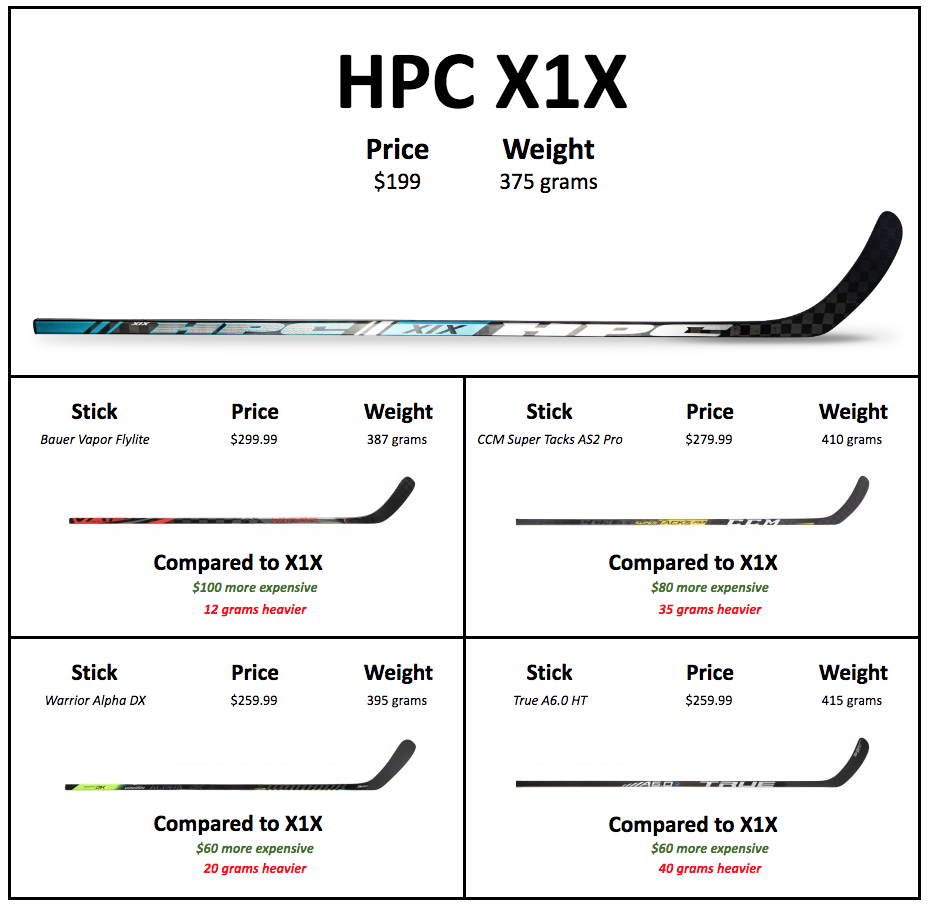 What are you really paying for?? 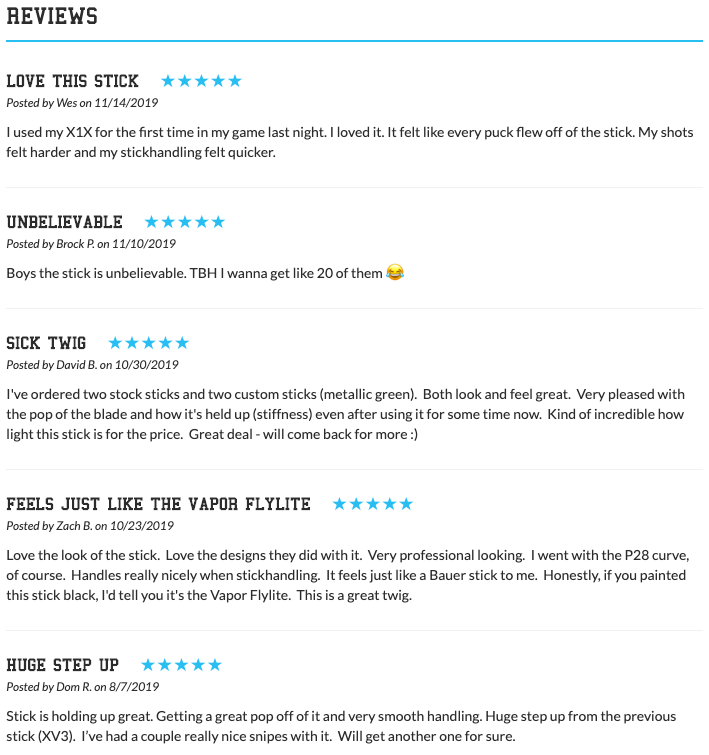